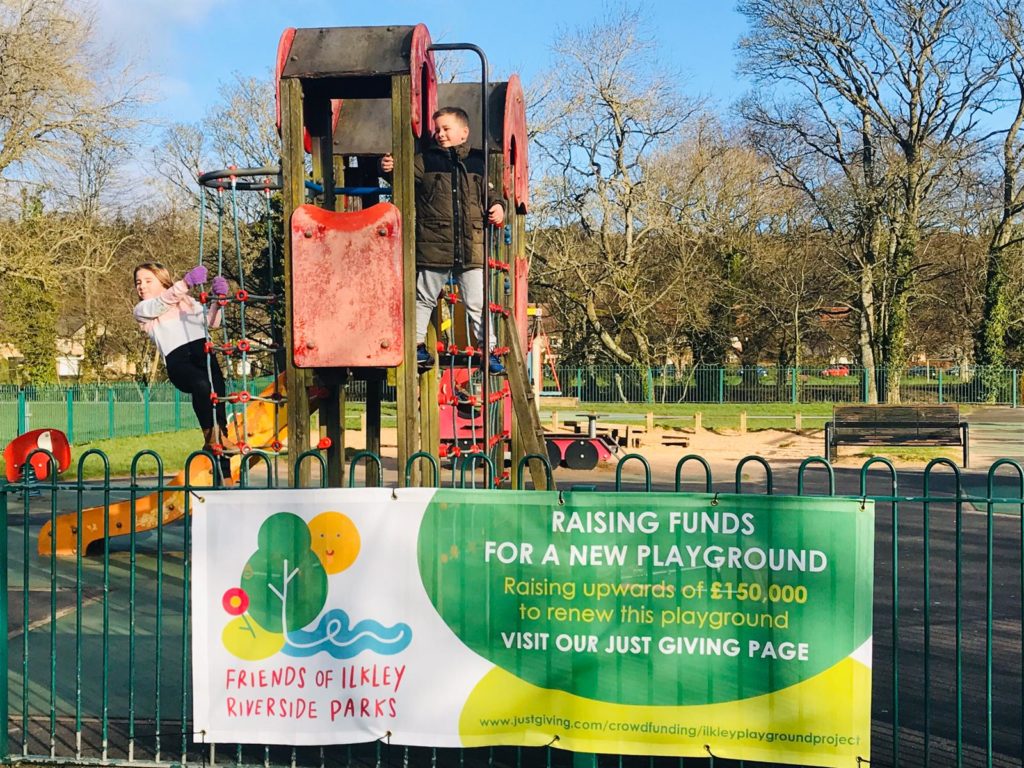 The happy children in the photograph are excited at the prospect of a newly refurbished and revamped Playground in their Park.

Rachael Robinson, the Co-ordinator for the Playground Appeal Fund said;

“The Playground at Riverside Gardens in Ilkley is a very popular facility which is much used by both parents and children of Ilkley and visitors and their children alike. However, the equipment is now quite old and in need of modernisation as is the infrastructure it sits on. Additionally, the equipment currently in place is inappropriate for those children who have a disability or have restricted mobility issues and in this day and age this is unacceptable. This would not involve special equipment for disabled children but simply equipment which can be used by them, for example, a Wheelchair Roundabout, Bowl Swing, etc. of which there is now a wide choice. We intend to consult with local schools to ensure we establish what they would really like to see in the new Playground”.

Ed Duguid, Chair of Friends of Ilkley Riverside Parks, who are sponsoring the appeal, added:

“We have a strategy to raise the funds over the next 18 months or so, and quicker if we can do it. We have already received encouragement and support from local businesses and local charitable organisations, including the Roundtable and Rotary Clubs in Ilkley. In fact, the Rotary Clubs are already involved in helping us to plan some Sponsored Walks for later in the Summer, a local business student, Georgia Hammond, is organising a Fashion Show Fundraiser at Westville School at 7:30 pm on 6th March (Tickets for this are still available at: whsfashionevent@gmail.com ). The schoolchildren from Moorfield School raised £150 from Carol Singing on the Grove at Christmas and have made the Playground Project their main cause for 2020. Brilliant! Every little counts with such a big total”

“We will be applying to much larger Funds and other local charities to see if they are prepared to support the project, but every little donation from local people or anyone who visits the Park and would like to see a new diverse and safe Play Area that will serve a wider range of children and provide them with the best experience we can give them will help us reach our target quicker. Our children deserve the best Play facilities we can give them.”

Initial estimates by the Company who provided the new playground in Burley in Wharfedale put the cost of such a refurbishment at between £150,000 and £200,000. The Appeal has been set up to raise these funds. A Banner has been raised in Riverside Gardens by the Playground itself and tells people how they can donate to this Appeal Fund.

Anyone wanting to DONATE can do so here