Blog » A Leeds Dad’s Perspective on Lockdown with a Baby and Toddler!

A Leeds Dad’s Perspective on Lockdown with a Baby and Toddler!

Andrew Carter is a 33-year-old author and dad from Headingley, who writes heartwarming yet humorous blogs about his life as a new dad. In this guest blog, Andrew shares his experiences of lockdown with a baby and toddler!

“Why are you standing there?” Louise asked me yesterday.

“I’m waiting for the kettle to boil.”

One week into lockdown, a couple of cracks have started to appear. We also had a disagreement after Louise asked me to clean the toothbrush holder and I questioned whether this was worth going upstairs for. It’s not a proper job, is it? You might think she just wanted me out of her way?

Overall, though, it’s not been too bad. Obviously, coronavirus itself is scary and totally shit but, so far, we’re coping okay with this weird new housebound life. We have a baby and a toddler though so our world shrunk a while ago. The nightclub closures, for example, are not having a devastating impact on our lifestyle. The Morrisons’ one in one out policy was the closest thing I’ve had to clubbing in the past two years.

We’ve tried to instil a bit of routine into the day so as to avoid insanity. This starts with the Joe Wicks PE class each morning. I must admit I wasn’t previously a fan of Joe and wasn’t too displeased (clenched fist) when he missed his penalty at Soccer Aid last year. My scepticism was almost definitely down to him being rich and handsome with terrific hair. He is, though, likeable and I’ll happily admit I’ve been converted, finding myself flicking through Louise’s Lean in Fifteen book in an idle moment.

A couple of days ago, as Joe told us what a great workout it was and what a great day we now had ahead, I was fully on board. As I was basking in the post-workout endorphins and considering growing my hair, our toddler Joshua darted past me, ran into the kitchen and ragged the dish drainer off the kitchen top smashing, among several other things, my favourite coffee cup. Joe had lied to me, this wasn’t going to be a great day. 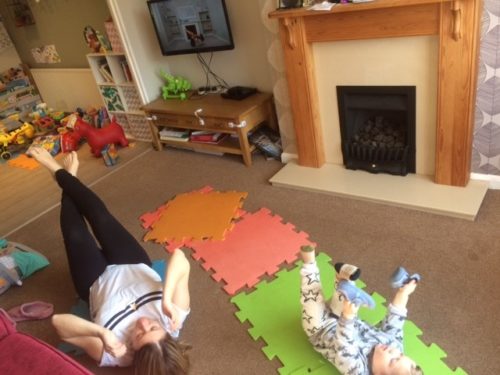 Each afternoon, we’re doing a planned activity with the lads. Jacob is 9 weeks’ old so his interests don’t stretch far beyond milk, sleeping and stopping us from sleeping but Joshua’s tastes are a bit more advanced (dinosaurs and sea creatures) and he’s now at a great age where you can have conversations with him and try new things out.

I last attempted homeschooling in 2013 and it was not a success. I was teaching English in a language school in Hong Kong and advised by a colleague wearing a nice shirt that the “real money” was in private lessons. Taking his words of wisdom on board, I was quick to accept when a lady asked if I could teach her niece one evening a week. The niece, it turned out, was a genius and spoke better English than me. Rather than making a quick quid, I spent hours preparing lesson plans and sweating when she asked follow-up questions about semi-colons. She also lived an hour away and her mum, who sat in on the lessons and made notes, was tight, paying £8 an hour instead of the £25 figure my sharply-dressed colleague had mooted with a wink.

I hoped teaching my own offspring would be a smoother experience and it started well, with an interactive edition of Elmer the Patchwork Elephant. Joshua got fully involved and seemed to enjoy it, although I had to reprimand Louise for going on her phone mid-story. 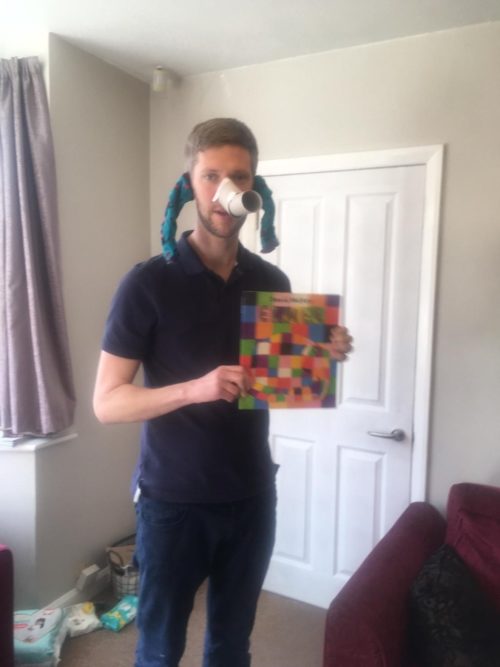 Sadly, it turned out I’d peaked way too early and, after rapidly running out of ideas, I nosedived later in the week with a guitar singalong session. Similarly to my homeschooling history, the last time I played the guitar to an audience, things did not go well. Louise and I were backpacking around Asia (forgive me for delving into the past again; we’re not getting out much at the moment) and we’d drunk an irresponsible amount. At an open mic night, I took to the stage attempted to play “Save Tonight” but was forcefully escorted off stage pre-chorus and advised to leave the bar by an unusually tall Vietnamese man. Later that evening Louise and I got matching tattoos (bad ones. Is there such thing as good ones?) but massacring an Eagle Eye Cherry classic was the bigger cause of my sinking feeling the next morning.

Hoping a toddler and a baby would be an easier crowd than a bunch of dreadlocked Scandinavians, I felt confident as I started with Joshua’s favourite, and the only song he knows the words to, “Twinkle Twinkle, Little Star.” Before we’d got to “up above the world so high” I’d lost him. He jumped off his stool, whacked Louise with a toy watermelon, and ran away. We found him in the hallway sitting on his potty. The first time he has ever voluntarily sat on it. Make of that what you will.

Of course, there is anxiety about coronavirus — what started as an apparent inconvenience and some bad jokes about its Mexican beer namesake has turned into the biggest worldwide crisis of a generation. We’re managing to keep spirits up though and having children is great for helping you momentarily forget what’s going on. I’ve cut back on following the news all day, finding time is better spent watching Peppa Pig with Joshua, although Daddy Pig is starting to irk me a bit. The guy is a moron.

Limiting the idle scrolling on social media helps too; there’s little to be gained from seeing a guy you didn’t really know in the year above at school detailing his coronavirus conspiracy theories in a lengthy bullet-pointed Facebook status. This method did backfire though as I had no idea about the NHS applause last Thursday night.

“What’s all that noise? Inconsiderate idiots will wake up the baby!”

When I opened the door and finally understood what was going on, it was overwhelming. A fantastic gesture and, for the first time since the birth of our children/watching The Notebook, I shed a tear. The general community spirit does seem to be strong and there’s loads of other good stuff going on; people talking to each other in the street, albeit while dashing across the road to get out of your way, is nice. As is speaking to family and friends on FaceTime and seeing the rainbow pictures cropping up in windows everywhere. It is a tough time but, like everyone else, we’re trying to make the most of it and enjoy spending (absolutely loads of) time together.

Oh, and we’re making sure we keep busy. The toothbrush holder is sparkling. 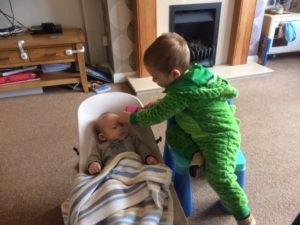 Thanks for reading and I hope everyone is doing okay in this weird time. If anyone has any suggestions for toddler activities, please let me know!

*Andrew Carter is a 33-year-old author from Headingley. His book, The Thing Is, a collection of anecdotal tales (about everything that went on before having children) is out now published by Proverse. You can buy it here: Thing-Andrew-Carter/dp